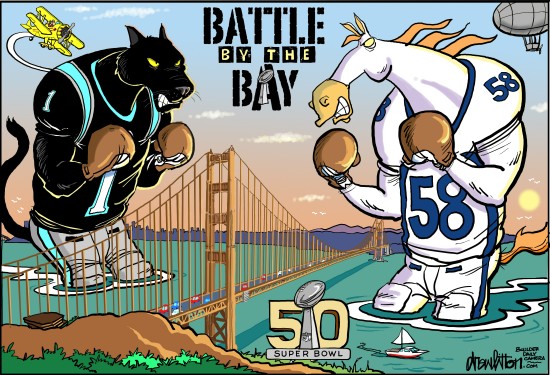 7 Reasons I think the Broncos will win Super Bowl 50.

Which means he plays this as if it is the very last time he steps on a football field as a player. Think Elway’s helicopter run in Super Bowl XXXII and you get the picture. Peyton had his best practice of the year on Thursday. He is more focused and capable than he has been all season. Strategy: Involve the Broncos Tight Ends more, and throw to Emmanuel Sanders all day long.

The Broncos Defense is more than capable of stopping the run which is what the Panther like to do. Strategy: Stack the line with 8 or 9 guys, double team TE Greg Olsen and dare Cam Newton to beat you throwing to the other guys which most of us can’t even name.

This is one I haven’t heard anyone else talk about. Think about it. Manning. Elway. Kubiak. Three offensive geniuses, plotting one great game plan. And here’s the deal. All three have been in Super Bowls. All three know what it takes to overcome all of the distractions that the Super Bowl entails. Strategy: Think Super Bowl XXXIII against the Falcons. Elway and Shanahan on the sidelines looking at polaroids taken during the series before. They spot a weakness in the Falcons secondary and throw long on the next series for a TD. Experience in the big game. It matters.

Experience of the environment does have it benefits. And the changes in the Broncos coaching staff from the last time the Broncos played the Super Bowl cannot be overstated. All of them have Super Bowl experience. The difference between the mindset of Gary Kubiak over John Fox is night and day. On Sunday it pays dividends.

In a grading scale devised by the Dallas Morning News the Broncos rank 7th in Special teams. Carolina ranks 30th.

He has a knack for letting the Big Dogs Hunt. I expect an innovative approach to corraling Cam Newton much the way he did Tom Brady. He has the defensive talent to do a lot of different things. He will come up with something that will confuse and befuddle Newton at a most opportune moment. You can bet your house on it.

7. Motivation of the Intangibles.

Peyton’s Last Game. This One’s For Pat. This one’s for Demarcus Ware. Wade Philips. Gary Kubiak. Von Miller. I could go on and on. But those kinds of motivators are powerful. The Broncos had them in Super Bowl XXXII in their win over the Packers. They have them Sunday for Super Bowl 50.

11 Thoughts to “Battle by the Bay”