Perfect for your man cave, garage, living room, dining room, home office, kitchen bedroom and bathroom this collection of cartoons from the Avalanche's run to the Cup is a collectible you'll want to add to your collection. Featuring 5 cartoons from the coloradosun.com this 12x18 poster it's the right size for easy framing. Drew will even sign it for you! $20 plus shipping 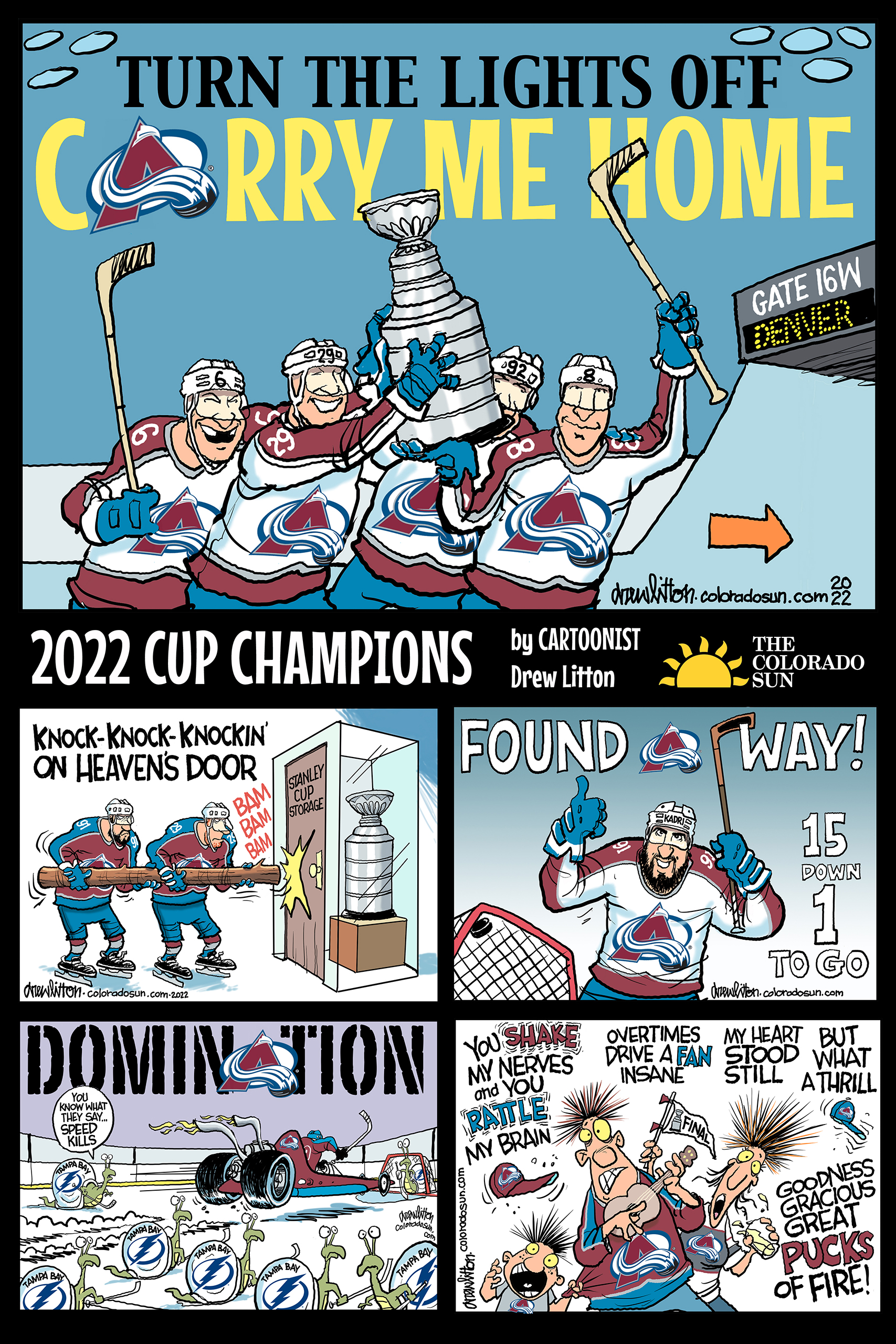 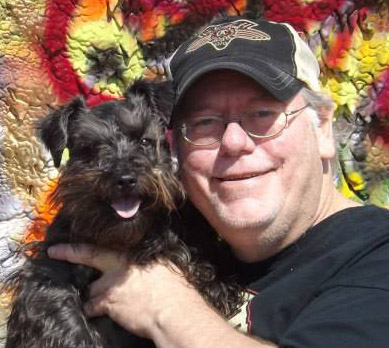 This whole thing began with my grandfather reading me the comics as a kid. I grew up with Pogo, Dick Tracy, L’il Abner and, of course, Peanuts. I was also one of those kids who would wake up at 6:30 on a Saturday morning just to see the latest episode of Underdog, Woody Woodpecker, Mighty Mouse and the Impossibles. Those cartoons and large bowls of Cap’n Crunch were my major source of nourishment in those days. They still are. Yes, even the Cap’n Crunch. And coffee. Lots and lots of coffee.

People always ask me where I learned to draw. I must come clean…I learned everything I know about cartooning in Algebra class. Throughout my youth I was subjected to the single worst college football program in the country. UTEP football was truly awful. It bore no resemblance whatsoever to the sport we recognize as football, but it was always good for a few laughs. So I developed this kind of warped sense of humor about sports, I’m convinced as some sort of survival instinct.

I did a comic strip in college, worked at the El Paso Times, first as a copy boy, then as a staff artist responsible for charts, maps and story illustrations. I managed to sneak in a few cartoons now and again. I joined the Rocky Mountain News in 1982 as the last of a dying breed, the American sports cartoonist. They were a valuable staple of sports sections in the 20’s, 30’s and 40’s, but as technology advanced and the space in newspapers shrank, the sports cartoons were the first to go. Legendary names like Willard Mullin, Bill Gallo and my favorite, Dirk West, slowly became an endangered species.

I enjoyed 26 years drawing for the Rocky Mountain News in Denver until it closed in 2009. I published a few cartoon anthologies and was fortunate enough to win an award or two, including one from the National Cartoonists Society, during my time there.

These days, I’m the founder and CEO of the Drew Litton Co., exploring a new realm of creating merchandise and occasional public speaking. Of course I still draw as well. I’m nationally syndicated by Universal Uclick and draw for my great partners at KUSA 9NEWS, the Boulder Daily Camera, Colorado Rockies magazine and Mile High Sports magazine. I’m also the proud staff cartoonist for the Guadalupe County Communicator in Santa Rosa, New Mexico.

My readers have always meant the world to me. I’m so glad you continue to follow my cartoons in print, online and on social media. It’s been an honor and a privilege to document Denver sports for you for over 30 years!

To Infinity and Beyond, 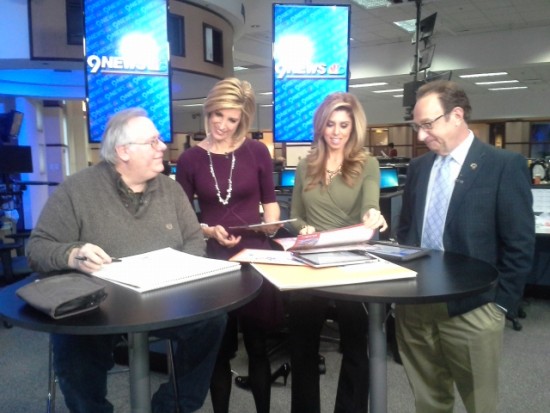 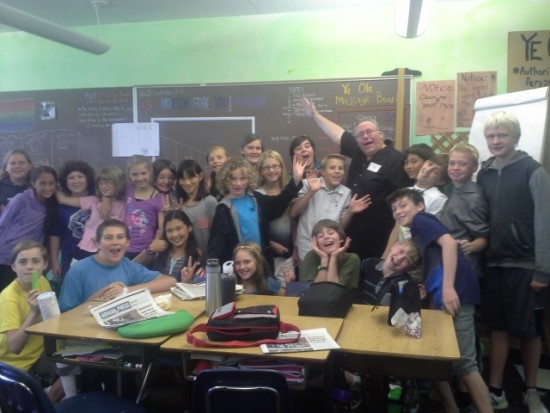 Drew Litton is a Cartoonist and Humorous Illustrator. His work has been featured on ESPN.com, The Chicago Tribune, WGN Chicago, KUSA Denver, The Rocky Mountain News, Coloradosun.com as well as the Denver Broncos, Colorado Rockies and the Colorado Buffaloes. He is syndicated by Andrews McMeel. Drew resides in Colorado. 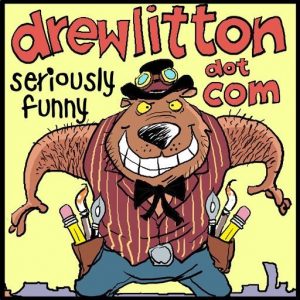 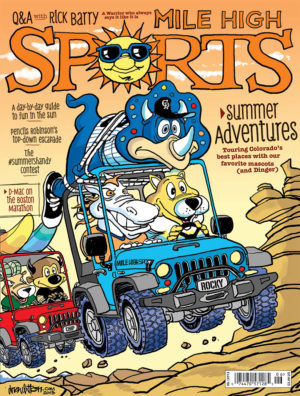 Stuff You Can Buy 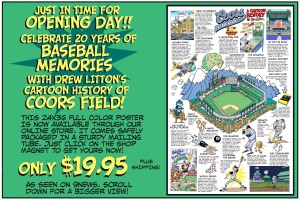 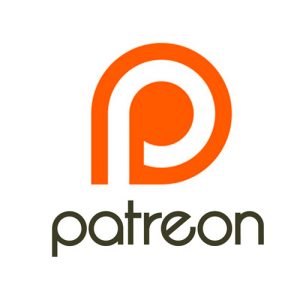 Stuff I can create for you 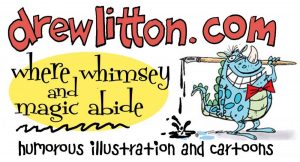