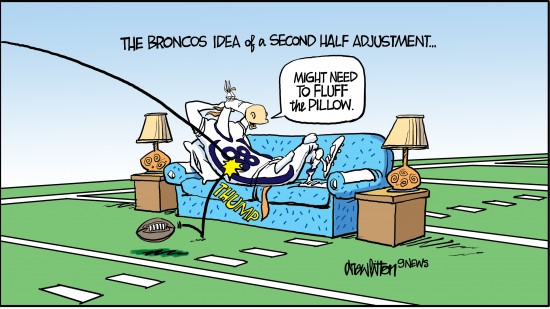 Hard to fathom how the Broncos could possibly be more inept than they were against the Raiders last week but low and behold they were. It might be time to hit the panic button if the snooze button weren’t in the way. They will be alright actually. My scenario goes a bit like this: Peyton returns, the Broncos win both of their last two games and win the AFC West. They get a bye in the first round and will end up beating the Steelers in a rematch here in Denver. The Broncos then will face the Patriots in the AFC Title game in New England. Beyond that is anybody’s guess. The Broncos have to get healthy to have any hopes of this playing out. And find a wide receiver besides Emmanuel Sanders or a tight end who can actually catch the ball. Or at least act like it matters to them. So relax and enjoy your eggnog. It will all be OK.